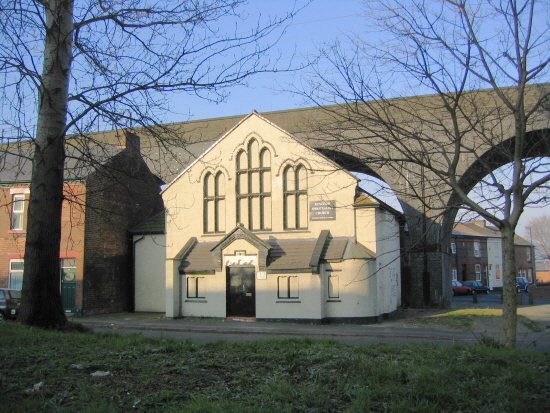 The Runcorn Improvement Commissioners approved, on 4th October, 1888, the erection of a Mission Room with Classroom, under one of the Railway arches in Ashridge Street for Mr. G. Marshall and others. The ends protrude on each side of the arch.

It was originally intended for use by the Greenway Road Methodist Church for Home Missions and it was for that purpose that Mr. Marshall, a former chemist in Devonshire Square sponsored its building.

In the years following the Church became something of a liability for the Greenway Road Methodists and it was then that the Spiritualist Society came along. They did not have a permanent home in Runcorn and decided to buy the building. They opened for worship on 22nd July, 1908, and it is known as the Runcorn National Spiritualist Church.

The pipe organ pre-dated the Church building having been made by a Manchester firm in 1867. The organist in the early post war years and mid fifties was William Pritchard of Brackley Street in Dukesfield.

Return to list
of Runcorn Churches Return to
Main Index