The bedrock in the Runcorn area is sandstone, formed from deserts which covered the area 250 million years ago. Runcorn is perched at the end of an outcrop of this stone which looks out over the River Mersey. From the nature of the remains of Halton Castle and Norton Priory, this stone has been used since Norman times. During the 18th. C. the quarrying of the stone became a major industry of the area and large quarries were opened around the then small town. The high point of this industry may have been in the late 1800,s. Around 1850 A.D. some of the earlier quarries had been worked out, and new ones had been opened south of the older quarries towards the village of Weston.These latter continues in use until the outbreak of WWII in 1939, although by then they had become shadows of the industry of 50 years earlier.

The spoil from the later quarries was dumped in the older earlier quarries and today these form the basis of the Runcorn Hill recreational area which was first laid down in the 1920,s. Many of the present day paths follow the lines of the old tramways which were used to carry the spoil down from the Weston quarries to these older ones. After 1939 the Weston quarries received the waste products from the nearby chemical works, and this dumping continued until the mid 1970,s. They were then finally topped out with soil and today they are used to graze horses on. In the 1990,s chemical vapours were discovered rising from buried chemicals which led to the abandoning of many houses local to the quarry sites, which had been built on waste rubble from the earlier quarrying. Where the solid sandstone had not been quarried proved impervious to this vapour and it had not reached the village of Weston itself.

Modern map with positions and names of the old quarries 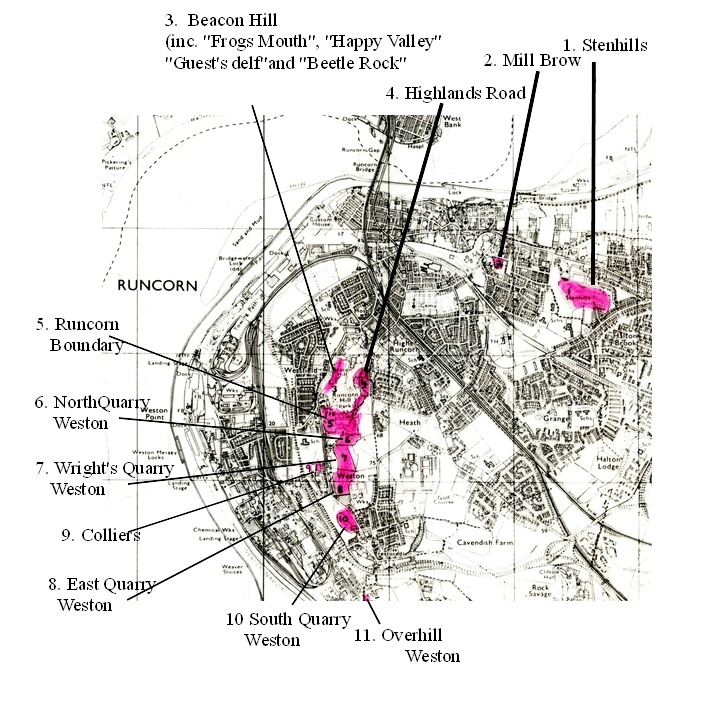